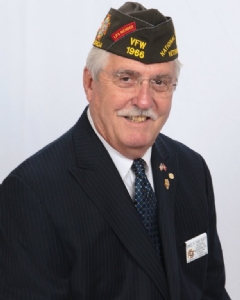 Dan joined the Veterans of Foreign Wars, Department of Connecticut Post 399 in 1986 as a life member.  Dan was elected Post Commander in 1987 and again in 1993 and 1994. Dan later transferred to the Department of Missouri Post 3838 where he also served as Post Commander for 2 ½ years. Due to company transfer Dan and his family moved to Davie, Florida. Dan transferred his membership to Post 9697 where he held the position of District Commander for three years and received All State Honors for the term of 2006-2007. Dan has since transferred his membership to Post 1966.  Dan was instrumental in establishing the VFW Dept. of Florida Annual Golf Tournament and served as the Dept. Deputy Membership Chairman, National Veterans Employment & Training, National Aide-De-Camp and on the Southern Conference By-Laws Committee as Vice Chairman.  Dan also established and chaired the Dept. of CT Annual Post Golf Tournament and served as the District 1 Adjutant.

Dan was employed with Morrison Knudsen Corporation as a Project Executive for over 34 years; Dan recently retired as Vice President of Construction for Fifield Realty Corporation, a developer of high rise construction.

Dan is a member in of the Military Order of the Cooties and the American Legion.

Dan and his wife, Pauline resides in Davie. They have three grown children and three grand children.