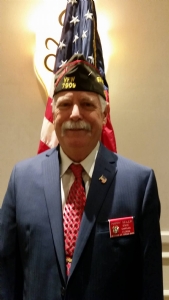 Harry was elected to the office of State Chaplain, Veterans of Foreign Wars, Department of Florida in June of 2019.

Harry's hometown is Boyertown, PA, where he graduated high school in June 1968 then joined the US Navy in July 1968 and served on the USS Kitty Hawk Air Craft Carrier from 1970 to 1972 off the coast of Vietnam.

Harry is employed by TrueNet Communications, Inc. in Jacksonville, Fl., as an engineering contractor for telephone and cable TV companies.  Harry served as a mentor for 3 years for troubled veterans in the Jacksonville area through a program called "Veterans Treatment Court".  There are numerous veterans courts throughout our state and our country enabling veterans to be treated fairly by the justice system with the consideration of their post-war transition, health and well-being.