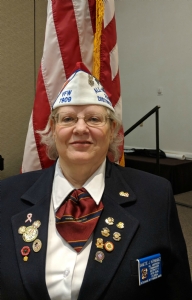 Dani was elected to the office of State Sr.. Vice Commander, Veterans of Foreign Wars, Department of Florida in June of 2020 at the 90th Convention in Orlando, Florida.

Dani joined VFW Post 7909 in Jacksonville, Florida in 2002 as a life member.  She was the Post Commander of VFW Post 7909 from 2009-2010 and as the VFW District 6 Commander from 2015-2016. She has been awarded both All State and All American Honors during her term of office.  Dani has had numerous Chairmanships at the Post, District and Department levels. She has been at the National level Deputy Chief of Staff, Aide-de-camp and All-American. She has been the Commanders Club President from 2017-2018.

Dani is a Gold Legacy Life member and a Life Member of the VFW National Home and Military Order of the Cooties.

Dani joined the US Navy in 1987. She attended Hospital Corpsman "A” School in Great Lakes, IL and Aerospace Medicine Technician "C” School in Pensacola, FL. In 1991 Dani was deployed for Operation Desert Shield/Storm where she earned her Veterans of Foreign Wars eligibility by being awarded the Southwest Asia Medal with Bronze Star.

Dani’s hometown is Tacoma, Washington and has made Jacksonville, FL her home since 1999. She has been employed for 19 years at Northeast Florida Endocrine and Diabetes Associates.

Dani graduated from Southern Illinois University with a Bachelor of Science in Health Care Management degree with honors. She received her Master of Business Administration degree from the University of Phoenix.

Dani is married to VFW Post 7909 member Robert Hernanadez and has two step-children, April and Joseph.